It is one of the infamous hills that has long winding road. I call it the Bloody Hill – YD. One rider got killed few days ago. I gonna buy a flower, put it to the main corner.

From time to time when I witness bike accident, hear about death of a rider, I question to myself “Why are you doing it?”

I did go to a F1 grade racing circuit three times with two active racers between March  and April 2018.  Average cost for a track day at the circuit was around 500,000 KRW (about $480 USD).  I know practicing at a racing circuit is a lot safer but the time and money is very expensive.  Reducing laptime would cost me fortune due to the bad habits I’ve gained without knowing, fear of higher speed barrier.

Since middle of March 2018, I had been riding like the adrenalin junkie to improve riding skills as part of the motorcycle riding school preparation.   How many bike accidents have I witnessed or heard? It was over 40. There has been four fatalities already during the season.

I’m very close to the target speed of cornering.  Increase it to 10 km/h or 15 km/h would give me the graduation ticket. Riding a sportbike on a corner three times faster than the speed limit looks stupid, irresponsible by general public. Traffic cops hate us. It’s understandable.

However there is no sportbiker who has death wish or try to harm other people on the public road. There is small group of people who loves the thrill and challenge at the edge of life and death.  For example, general pubic don’t complain about high altitude  mountain climbers,  The casualty rate of climbers, who goes to the Himalaya Mountains , is over ten percent. One out of ten climbers ends up dead. 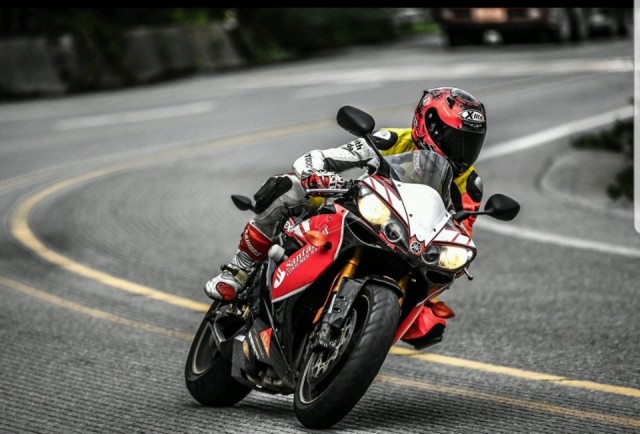 Email: k2.mountain [at] gmail [dot] com Every content on the blog is made by Free and Open Source Software in GNU/Linux.
View all posts by janpenguin →
This entry was posted in Motorcycle and tagged 2006 Yamaha R1, Cornering, sportbike. Bookmark the permalink.